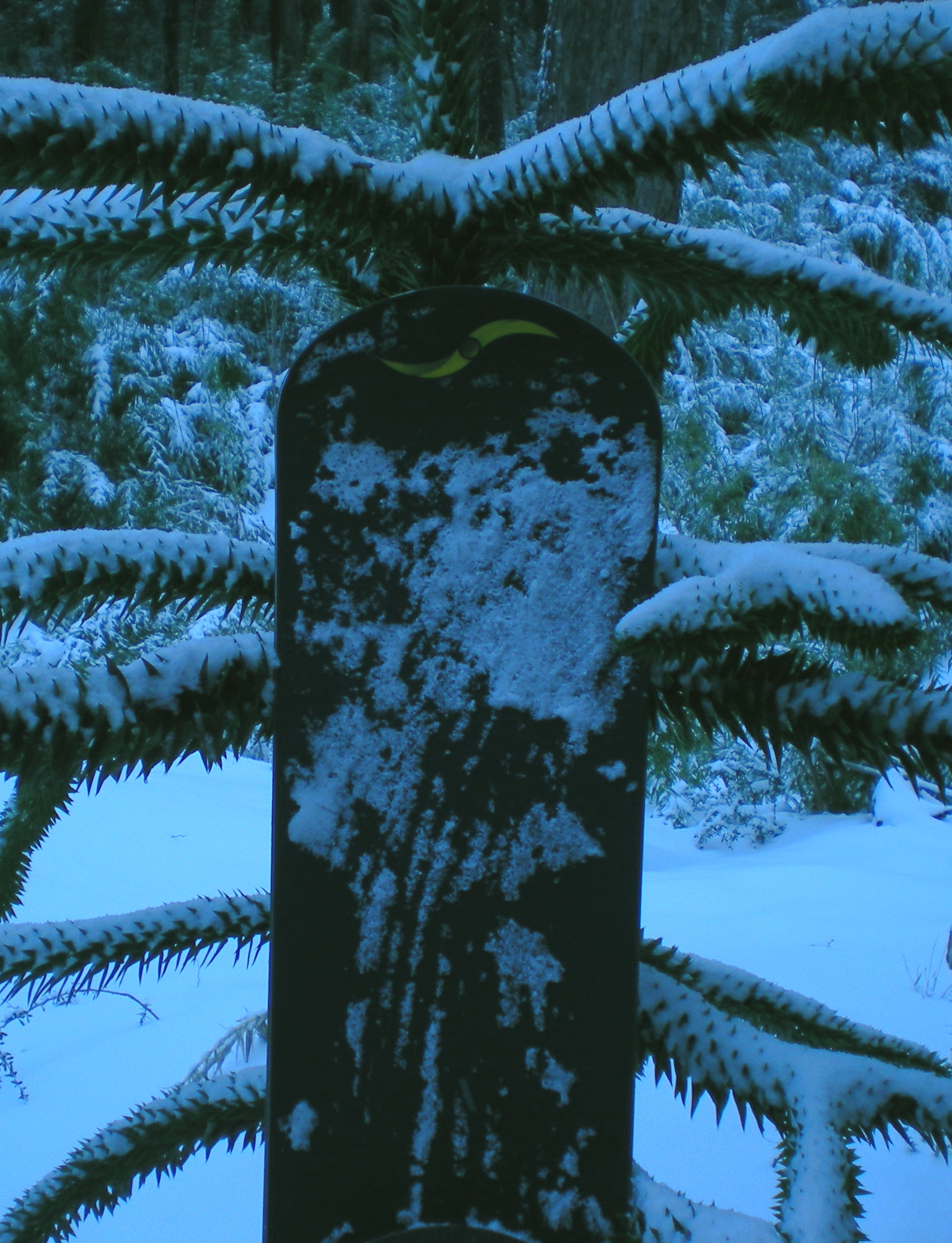 Cypress 185 next to Araucaria after some serious action.

As we go into the Olympic year, every board manufacturer represented on the World Cup

circuit is tweaking his/her processes, construction, materials, etc to come up with the top

performer that will podium in the one in four years Olympic event. There is no question

as to which board dominates the Olympic podium. However, several manufacturers have

been very keen in making appearance on the podium and the athletes are too.  This is what

is going on at the moment.

So, when the Cypress from Jasey Jay snowboards showed up at our door in early July

fresh off the press from Quebec Canada. We were blown away. The board looks like

something straight out of the Lord Vader skunk laboratory. The Cypress visually is quite

and “space-age” materials. Although these were never disclosed to us, we deduced them from

our experience and detail knowledge in this discipline.

real life testing. The base was zero degree and the edge was 2 degrees. We did not have

enough time to perform any radial tune, as we had a plane to catch. As usual we had on

can turn it. Thanks to the accompanying plate, turning the board and riding it was quite

effortless. The plate was easy to set up and dialed; only one adjustment was needed to

zero in on the sweet spot. More on the plate in a separate post. The Cypress was a fun

board and it got better, as the board got broken in, after about 5 days of riding.

Under various snow conditions, the board excelled. In soft packed powder conditions,

one needs to be a bit careful so as not to bury the nose. On the blue ice (glacier)

conditions of Patagonia, the 185 was in its own element at its very best. It grips and

grips but was very obedient when the rider’s input was to slide a bit to scrub speed.

contemplate getting back on the rail. What an awesome mind reader this board is!

The full assembly became a joy to ride on wind-blown, sun-baked crusted snow.

The Cypress made this rough hard snow such a joy to ride. The plate damped out

the unevenness in the terrain, instill rider confidence allowing for the rider to step

on the gas and charge.

Unlike most other boards in its class that we have ridden, there is adequate board feel,

and the board response was optimal. It is not too damp and not too lively but lively

enough to launch from turn to turn effortlessly. The board is fast and on a few occasions

scarily fast. We tip this board plate combination as a definite podium climber.