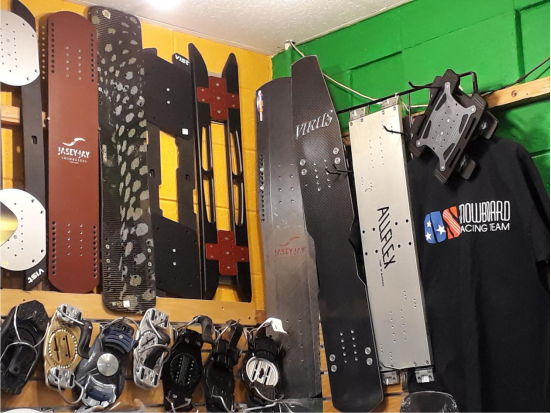 It has been five years since we reviewed snowboard plates, as they pertain to alpine snowboard racing. The bridge-plate system with a fixed point and the other end floating, actually sliding had just emerged as the plate of choice for reasons already discussed in our last review titled “Thoughts on Snowboard Plate – Alpine Snowboard Plates.” The Apex plate, a carbon fiber construction, on top of a Kessler snowboard ridden by Jasey Jay Anderson had just climbed the top spot on the podium of the Parallel GS in the Vancouver Olympics. We highly recommend that the reader should review that article first.

After the Vancouver Olympics, Jasey Jay Anderson went into retirement only to emerge a few years later with his own snowboard line that he manufactures in Canada. Subsequently, the Apex plate was the dominant plate on the world cup circuit, as it was readily available. Other bridge plates emerged to fill the gap like the SG plate, the Jasey Jay Snowboard plate (JJSP), the Virus plates and the obscure plate Allflex from Slovenia. Custom plate by Benjamin Karl deserved mention, however, Mr. Karl (a crystal globe winner) was not about production but climbing podiums.

All the plates were of the bridged configuration and most of them followed the Hangl-Spirig configuration utilizing the sliding mechanism with the exception of the Allflex. The Allflex plate was unique in its design, as it did not utilized any sliding mechanism but instead used hinges. It is a clever design but violated one of the main tenets of plate systems and integration. Plate systems are by the nature of their design are built to enhance the performance of the snowboard and not alter the flex of the board to any significant extent. The Allflex, however, violated this requirement. This violation was quickly overlooked once the American born Vic Wild, representing the Russian Federation,  stood on top of the parallel GS and SL podiums in the Sochi Olympics. This opened the flood gate for Allflex plate to become the dominant plate system on the World Cup circuit.

One can say that the outcome of the upcoming Pyeongchang Olympics in terms of plate is almost defined due to the sheer number of athletes on Allflex plates and most of them not wanting to rock the boat just before the big event. The individual that can rock the establishment boat would have a lot to gain, as a few newer plates are just hitting the slopes.

The violation of the basic tenets of the plate system mentioned above has led to snowboard manufacturers adjusting the flex pattern of their boards to compensate for the adverse effect of the plate on board performance. This would have a profound effect on snowboard advancement and performance, as the manufacturer that can best tweak its board to eliminate/compensate for the adverse effect of the plate will climb the podium and not the manufacturer with the best technology. In our opinion, this is a step backward for snowboard progression and advancement. We all know what happened to snowboard construction when Kessler introduced full layers of titanal in its construction. This advancement led to back to back Olympic domination at the hands of the Schoch brothers Philipp and Simon (see out first review). Now, it looks like the tail is wagging the dog, as the board manufacturers are now tweaking their boards to work with a plate and not the other way around. This is an intriguing development that could set back snowboard advancement.

On the other hand, the Allflex plate is undoubtedly the fastest plate system at the moment. One important thing the Allflex plate has introduced back into snowboard development is the modification of the stiffness that benefits those that want to freecarve and not race gates, even though you will not likely see this group of riders on an Allflex plate. The progression of the alpine boards has been toward stiffer decks that makes it difficult or almost impossible for beginner to the intermediate riders to master and have fun on the slope, it is a good thing Allflex changed that direction.

We shall attempt to analyze mechanics of the alpine snowboard system. The dramatic change in flex pattern between a standard board and a board with the Allflex insert pattern to be used with Allflex plate speaks volume. Before the flex pattern adjustments by manufacturers, it is obvious the in certain conditions, the semi rigid system was a tough stallion to tame. The elimination of sliding system lead to specific or concentrated loading at specific spots (anchor points). Even with the flex adjustment, the dynamics is not quite simple when the slope grades change, as the Allflex acts like a KERS (kinetic energy return system) under certain specific conditions. Most other plate systems are having to play catch up under such condition.

The Allflex construction, a full metal system, means that certain harmonics cannot be tuned out or dampened effectively. The construction is also such that cyclic loading (fatigue) takes it toll on the plate resulting in cracking in the machined alloy structure. As fatigue sets in, the flex of the plate is altered in a significant way that affects so many other parameters of the system like vibration damping and the system harmonics. The life time of this plate is therefore limited. A Formula 1 driver will not tolerate fatigue cracks in the suspension system of the racing machine; so, why should a world cup athlete. It is, therefore, highly recommended that regular inspection of the plate be performed specifically for signs of fatigue cracking just as performed on aircraft landing systems based on number of cycles.

All plate designers and manufacturers should familiarize themselves with materials performance that can be easily presented and analyzed in the form of the Ashby diagram. The diagram is the brain child of the acclaimed and decorated Professor Micheal Ashby of Cambridge University. An example of such a diagram is presented below.

Fig. 3.  Ashby diagram of the loss coefficient as a function of modulus for various materials.

The loss coefficient is related to vibration damping and at a glance, the upper left of this diagrams are elastomers and the lower right are metals and engineering alloys. Detailed discussion of these parameters and the underlying physics is beyond the scope of this discussion. Note that the loss coefficient (tan ?) can be plotted against the wave speed which is related to the the Young’s modulus and the density. Furthermore, note that most of these parameters will have to be considered at the operating temperatures and not close to or above room temperature. Careful combination of these classes of materials can be optimized when all the right parameters are carefully considered. Such combinations are well known and are generally called composite materials. We shall not delve into this class of materials here but there have been examples and usage of such systems in snowboarding.

Careful and knowledgeable material selection and designs can eliminate some kludgy mechanical modifications comprising of springs and dashpots seen on some Allflex systems. Some even have a split in the middle compromising the plate rigidity. Proper material combination, design and modeling can clearly produce a system that will target the desired performance space.

There are composite in use in snowboard plate systems. The Hangl-Spirig utilized composites, though minimally but in critical locations. The Apex plate, a carbon fibre plate, is a composite system. The Jasey Jay plate is a great use of composites and are readily tunable. Various versions of the plates occupy different performance space on the Ashby diagram. The latest version swapped the mechanical hinge/slide mechanism for composite polymeric deformable mechanisms, as shown below. Virus had utilized similar mechanisms previously. 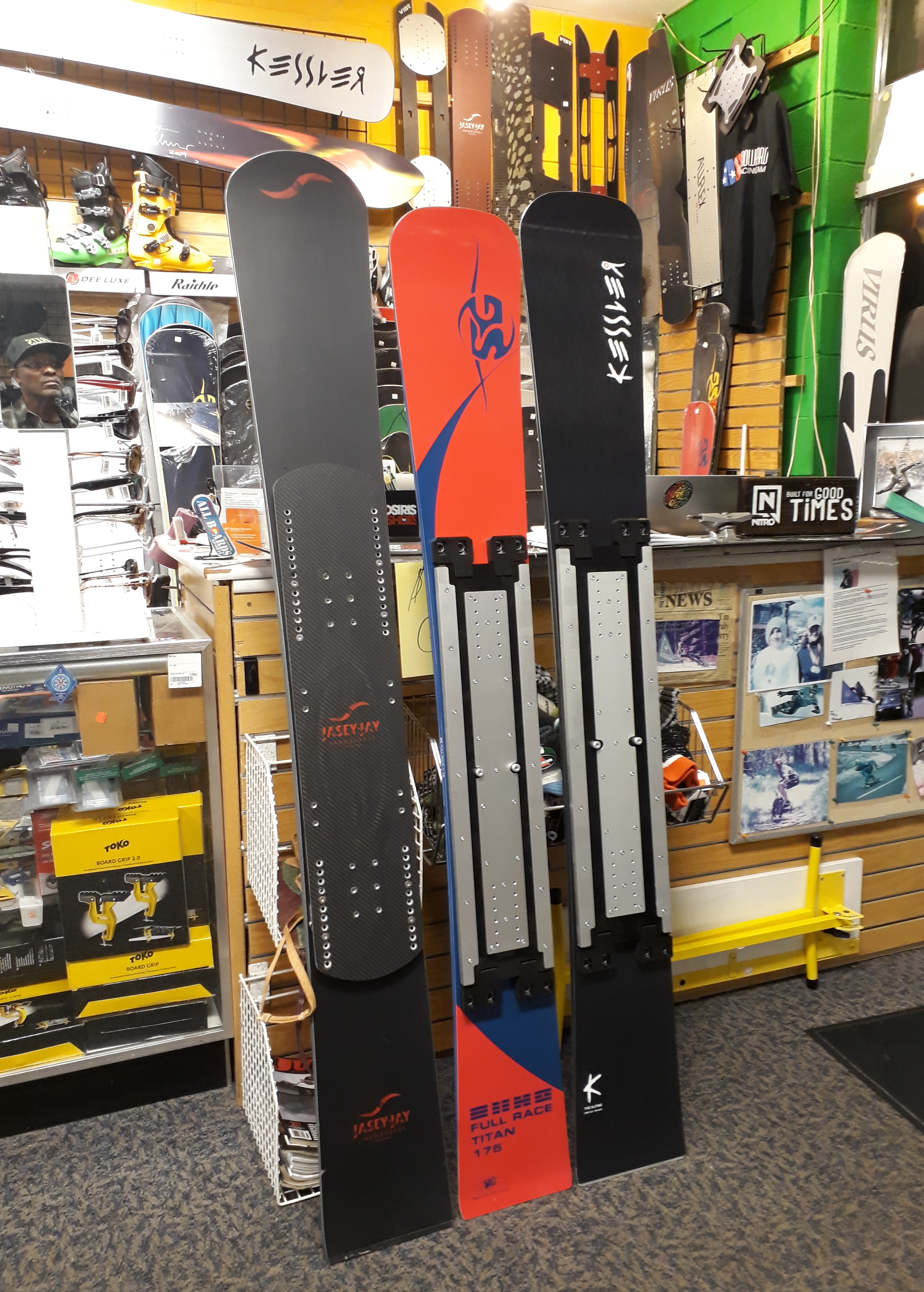 The system that has piqued our interest is that from Vist. Vist has been in the plate system game for some time and has dominated the slalom end of the race discipline for some time. Now, Vist just stepped into the bridged plate game with a complete sliding system called Vistflex with locating center pins to ensure that the plate does not wander, as shown in Fig. 4 above. It is an elegant design utilizing a composite material system. It used the Allflex insert pattern but allows the board to do its things without any constraints by allowing the plate to slide both front and back, and pivot up and down while damping unwanted vibrations. This plate should open up the innovation space for the board designer and builder, as they are free to innovate and not be constrained by any plate system. We are yet to give it a thorough shakedown but we like what we see so far. It is quite possible that current boards made for the Allflex plate may not work well with the Vistflex, as it does not constrained the board like the Allflex and might feel a bit soft; a good thing for freeecarving.

Going forward, one can envision the use of advanced materials technology. The use of passive damping systems like the AntiphaseTM technology, developed by Peter Bauer and currently being utilized in the high-end Amplid snowboards would see more widespread use. One can also envision active damping systems coming into use, whereby opto-mechanical materials coupled to opto-electronic materials can directly target specific frequencies. There are still lots of technological advancements that can be implemented in snowsports especially when the kinetic energy of carving a turn can be harnessed and converted more effectively but there is no doubt that the Allflex plate is leading the pack at the moment. As the Olympics go: Hangl-Spirig – Apex: Vist – Allflex:Allflex:Vist – ??, which is next? Stay tuned, we will be back in a few years.